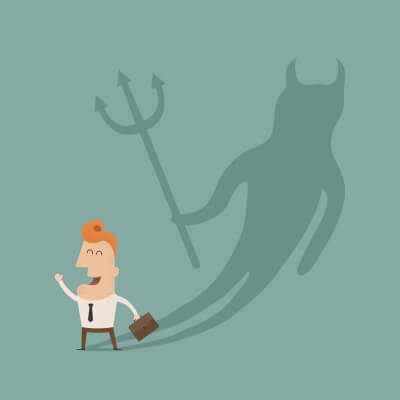 That’s this mysterious phrase that Steve and Ann told me about the other day.

At first I thought it was because my shadow was like the wolf from “An American Werewolf In London” (he was one of my relatives, very sad business, but that’s another story…) on one sunny late summer evening walk.

But no, apparently Steve was referring to one of the Alisar posters. He went on to tell me this story about a very senior board member who was really good, but was a little bit removed from the shopfloor.

Steve and Ann had been working for his company for six months and had never met him. Can you believe it?

I met a man who wasn’t there…

When they met this enigmatic senior manager for the first time Steve said to him: “People don’t know you. Even we thought you were a myth. We didn’t even think you existed”. Luckily the manager just laughed.

The other thing you need to know about this manager is that he had a reputation for being critical. So when he usually ventured onto the shopfloor he would tell people what they were doing wrong or he would say “I don’t like that, you need to do something about that.”

Reminds me of what Ann said to me when I walked my muddy paws all over the clean kitchen floor. Not fair, those cute Andrex puppies get away with much worse!,,, now where was I?

So one day, on Steve and Ann’s suggestion, he walked onto the shopfloor and asked three people:

These conversations swept the building like wildfire. Two hundred shop floor staff couldn’t believe it – this person who was usually so critical was behaving in a completely different manner.

And when Steve and Ann told him the impact his chat had on staff he was absolutely gobsmacked. It changed his leadership style forever.

He even framed one of the Alisar “Beware of the Shadow You Leave” posters.

Steve tells me this demonstrates how leaders can have impact without even doing something. Well, if that’s the case I must be having an enormous impact on Alisar because doing nothing is one of my favourite things.

Thanks for reading my latest lamppost, and until next time…. “Be More Maizi!”